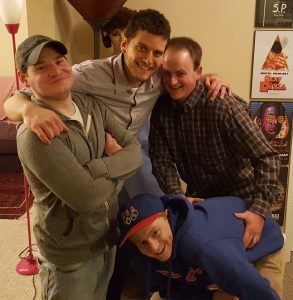 Brad loves baseball as much as Charlie is a baseball.

This episode of Schooling Noah w/Aaron Maslow and a Special Guest is all about baseball! Oh, boy! America’s past time has never felt so alive as it gets a much needed burst of impassioned explanation with baseball experts, Charlie Cohen and Brad Galli. This is the episode where Noah and Aaron finally learn something.

Baseball has survived for centuries because of it’s simplicity and complexity. The sport is as much about hitting a ball with a stick as it is a chess match. Charlie and Brad, who are experts, sincerely, experts, on baseball, they are, describe with sincerity and clarity the ins and outs of the game.

You can hardly stand watching an actual baseball game on TV…Why would you want to listen to bunch of dorks talk about baseball? First, these guys* are hilarious (*Brad only). Second, this isn’t all about baseball. Sure, they get into the players, the skill and the organization of the game, but that’s only after they get serious about Quidditch, kids named Bucket, Cubs’ fans, the DSL, Bill Crystal, Adrian Petersen, the baseball winter draft. When are you out of a baseball game? Never. When are you going to share this podcast? Never. Think about it though. Aaron and Noah learned a lot and had fun doing it. Thanks for listening. Enjoy the rest of your day.

You can follow these guys but they are no where to be found. Find Brad on Facebook or follow him on Twitter: @BradicalGalli. You can actually find Charlie when you order from Door Dash or on Sexpot (check out the foot note).