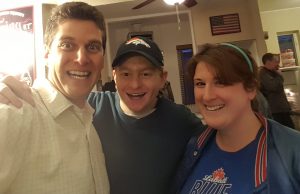 After 17 years of shame and defeat, the bills made the playoffs and Super Bowl #noJovi

After making the playoffs only one time in the past 18 years, the Buffalo Bills may be long forgotten by the NFL, but they have not been forgotten by the fans who live in Buffalo. Bills’ fans, also known as the Bills Mafia, are some of the most loyal around and, after having very little to cheer about, have become some of the most explosively fun, daring, creative and drunk in the league. Today on Schooling Noah w/Aaron Maslow and a Special Guest, Bills Mafia expert and Denver transplant (formerly of Buffalo), Meghan DePonceau, teaches Noah and Aaron about how to love your team even when they’re the worst.

Today’s episode aims to answer questions like: Did the Buffalo Bills make the Super Bowl this year? What is the Bills Mafia? How drunk is “Buffalo Drunk?” Who is Shady McCoy? What’s so great about Buffalo, New York? What’s the opposite of seasonal depression? Did you know that Jon Bon Jovi, lead singer of U2, is personally responsible for the Buffalo Bills failures over the past 18 seasons (#noJovi)? And, did you know that after his failed purchase of the Bills, Donald Trump decided his next endeavor would be to run the United States executive branch? If you like cities near Canada, friendly people who get crazy when they drink too much and eat too many wings, and debauchery of the highest/lowest levels, then you are going to love this episode. We are so glad you tuned in and hope you enjoy the show.

Meghan is not only the unofficial director of communications for the Bills Mafia, but she is also a comedian from Buffalo based in Denver. Check out her Twitter @MeghanIsAJoke or one of her amazingly hilarious comedy shows Uncorked! and Shanty Town. Details can be found at her contribution to Denver Comedy 5280Comedy.