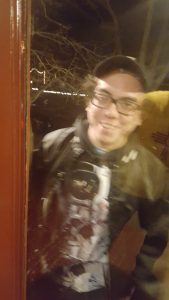 Jacob looking through the looking glass.

Holy calzones! Have we got a show for you! This is Schooling Noah w/Aaron Maslow and a Special Guest where Noah Reynolds and Aaron Maslow, who suffer from common American ignorance, interview experts to gain insight into the world and expand their minds. Today’s expert is the delightfully enlightened, Jacob Rupp, who shares his knowledge about films and movies. The difference between films and movies is whether or not Tom Hanks is in them. Jacob’s experiences are not only in watching movies but also having opinions about movies which he has seen. This was the first episode that Schooling Noah recorded so some of the concepts are fun or weird depending on where you went to college.

Jacob is going to spell out how to make movies; specifically Vine videos. Some call it six seconds of bliss. Others agree. He talks about some of the movies that are out there. He also argues that no normal people make movies which is evidenced by the fact that good actors are nuts. Tom Hanks comes up. And so does his son, Tom’s Hank. What’s the best John Candy movie? Is cereal a kind of soup? Snakes on planes….sharks in boats…what’s next? Dogs in Heaven? Find out all the answers to these questions plus what’s the deal with people? Stick around to the end for some sweet impressions of Noah. Thanks for tuning in.

Find Jacob on Twitter @RuppSays or at his really cool podcast called Ice Cream Social (Twitter @ICSPod or at Sexpot). Him and future guest, Cody Spyker, have like 300,000 episodes. They’ve run out of people to interview. They just talk to dolls now.