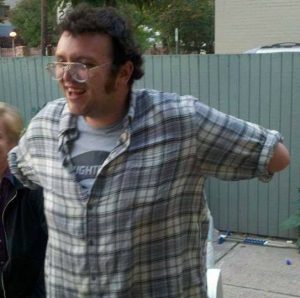 Bullies are culled only by love and amputation.

This is Schooling Noah w/Aaron Maslow and a Special Guest; a podcast that allows experts to educate young Noah Reynolds and his grandfather, Aaron Maslow. Today’s episode features a genuine rabble-rouser, master of shade, and eye-poker, Sam Tallent. Sam is on the program to introduce Noah, Aaron and our listening audience to bullying.

After war, poverty, nuclear armament, climate change, gender inequality and bad skin care is the world’s most pressing issue of bullying. Bullies, it would seem, are everywhere. From online forums to the school playground, bullies have the ability to kick you while you’re down, push you into self-loathing and steal any semblance of hope that may have shone in your heart. Sam joins us to show Noah all of those things.

Sam has an extensive back ground in put downs and expletives. For dozens of years he has brought “it” both as a trouble maker and as a victim of senseless attacks of words. He has seen bullying from both sides of the table and illuminates on concrete examples of bullying. Part of being a bully is cock-sure confidence and a support network who is there to build you up; also known as friends. After some gentle ribbing, Sam breaks Noah down and explains that in these situations, it’s crucial to have friends.

Noah is doing his best to hang in there and shows promise in the art of confrontation. That is, until it is revealed that he has to leave right after the recording session to go to the mountains. He, his father and brother, Gus, are going pickling after a chilly night hike. This is a really informative episode and shines the light on identifying bullying behavior.

Sam Tallent is a stand up comedian who can be seen on Comedy Central’s Roast Battle and on Viceland. He’s touring all the time. Find more information about his whereabouts on Twitter @Sam_Tallent or at his website: SamTallent.com