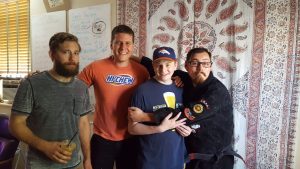 Welcome to the Schooling Noah podcast with Aaron Maslow and a Special Guest. Today on the program Noah and Aaron have invited some skilled masters of martial arts. JD Lopez has been a black belt in American Kenpo Karate for 10 years and also posses a blue belt in Jujitsu. The show also welcomes Brazilian Jujitsu black belt, John Papaioannou (the Greek). Between the two, there are over 10 years of martial arts experience. They are here to teach Noah why having a gun doesn’t make him an automatic black belt.

JD first introduces some of the tools and weapons that he practices with when he’s alone and feeling strong. He illustrates some of the philosophies that Karate instill in the young hearts and wallets of its students. To be honest, disciplined, respectful tall and wise are just some of the lessons that mold Karate chumps to Karate chaps. JD explains the belt system and differing styles of martial arts. Then, for some reason, he decides to interview John.

John recently received his black belt from an accredited dojo on the east side of Denver. A place where trouble finds you. John decided rather than run from trouble, he would face trouble head on. John talks about the belting system in Jujitsu and the history of the sport. He gets into grappling techniques and the secrets of homonyms. He explains the reason he started learning the art is because Cornell University was too easy and he needed something that would challenge him. But he’s afraid of the indoors. So it had to be inside.

Aside from martial arts, the podcast covers a lot of topics. There are rumors that Chris Hardwick is in trouble and there are the sounds of South Broadway traffic. Noah attempts push ups. And, of course, our new sponsors including John Deere Lawn Equipment: don’t lose your toes. Thanks for listening.

JD is not only a Karate black belt. He’s also a podcaster and comedian. Check out his podcast, Left Hand Right Brain, or check out his show at Mutiny Cafe, Video Saved the Comedy Star. Or, follow him on Twitter: @LHRBpodcast

John practices many things. He is a black belt, sure, but he is an adequate pianist and soon to be a PhD of physics. He is a comedian and a lover. Check out his work at Sexpot Comedy or follow him on Twitter: JohnVowels