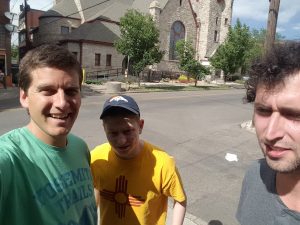 All of the magic of sorcery inside one human man.

Today’s guest on Schooling Noah w/Aaron Maslow and a Special Guest is world-renowned and expert of magic, Lucious Hammond. Luscious is a magician, skilled illusionist, escape artist, employer of sigil manifestations and master of physical pain tolerance. Lucious appears in the Sexpot Comedy Studio to teach young Noah and old Aaron about the history, mystery and inner workings of magic.

56-year-old Lucious starts the podcast by sharing how he fell into magic through the hands of a close hand magician at Tennessee’s own Dollywood. After learning the essentials of the craft, he moved to New Delhi in India to experiment with eastern forms of magic. From Dollywood to Bollywood you might say! Like a caterpillar morphing to a butterfly, today’s version of Lucious is the third iteration of his persona. He is growth and change and magic.

In the second half of the show, Lucious performs first close hand magic tricks using a deck of card. His first trick is called the “shuffle.” He ups the ante with his second trick, to Noah and Aaron‘s amazement, is an all out evacuation using a tank of water in the studio! Last, and in a weird turn, Lucious manipulates Noah, initially transforming him through witchery into the face of a dollar bill and then by using his body as an instrument for energy and love. It is as intense a magic trick as you’ve ever heard. Listeners should stay tuned until the end for a big reveal that leaves your hosts completely flabbergasted!

Lucious Hammond is played by the daring and funny comedian, Michael Isaacs. Originally of Chattanooga, Michael moved to Denver to pursue comedy and all of the advantages of a marginally larger city…specifically, the benefits of being an escape room puzzle maker. Check out other Sexpot Comedy podcasts that Mike has participated in by clicking on this link: Michael Isaacs will do your podcast and your comedy show whether you ask him to or not.