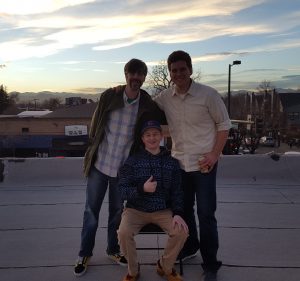 Jon loses more phones than anyone who has ever been on the show.

This episode of Schooling Noah w/Aaron Maslow and a Special Guest features voice-over actor, Jon Wilkins. Jon has spent many hours the past few years honing the ability to audition for voice over work, read professionally for audio books and edit that work. Jon teaches Noah the value of hard work and dedication.

There is a lot that goes into recording an audio book. But the biggest thing that will make you a break out sensation is if you sound like Sam Elliott (the guy from The Big Lebowski and of Coors Original commercial fame). Jon does an adequate job explaining what it means to read out loud for work and how much easier it is when you can read. He walks through the process of how Amazon secures book deals, the assembly line of authors out there, and getting gigs.

Furthermore, Jon loses his phone on this podcast. And then he goes bananas trying to find it. Turns out it’s in the Uber and every time Jon pings it from Noah‘s phone, an angel dies. Literally everyone is freaking out. Aaron finally calls the Uber driver and it goes straight to the autonomous driver’s voicemail. Will he get his phone back? There’s only one way to find out! Tune in and skip to the end!

In addition to being a voice over actor, Jon is a comedian based out of Denver. This is his Funny or Die Channel He runs a stand up comedy showcase every Thursday at 8pm out of the Sushi Hai restaurant. It’s a great show and you should go to it. He has a website: http://www.jonwilkinscomedy.com/ You can follow Jon on Twitter: @FunniCuzItsTru or just hire him to read your book: http://jonwilkinsreads.com/