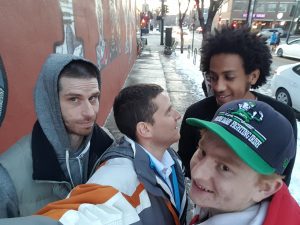 On the Schooling Noah w/Aaron Maslow and a Special Guest podcast, hosts, Noah and Aaron, speak with Nolawee Mengist and John Davis about rap music. John and Nolawee are bona fide rap N.E.R.D.s. They are experts in the history, production, art and performers of the genre. Their combined depth of knowledge creates a trajectory for this program that will inform and delight!

Nolawee and John are no light-weights when it comes to the rap game. They co-host a rap inspired podcast called As the Rhyme Goes On where they discuss recent rap albums and the general politics of the music culture with their guests. Today, they bring their love for music and deep insights of rap history and culture to Aaron and Noah. Rap music is one area that Noah seems to have a handle on. Taxes? Nope. Arks? Not this Noah. The best fonts for your resume? Noah can’t help. Women? Strike four. But rap?! Yes, Noah is already at the proverbial cruising altitude. When he joins meets with John and Nolawee, forces collide! Not even the no-nothing Aaron with his muted microphone and dopey grin can slow these juggernauts down.

If you enjoyed John Davis and Nolawee Mengist, you can find more of their content at their podcast, As the Rhyme Goes On (Podbean or at Sexpot Comedy). They are also stand up comedians based in Denver who host a comedy showcase for free every last Saturday at Westfax Brewing next door to the world famous Casa Bonita. It’s easily one of the best places to see comedy in Denver. And the Westfax show is good, too. Follow them on Twitter: @NolaweeMengist and @Johm1211.