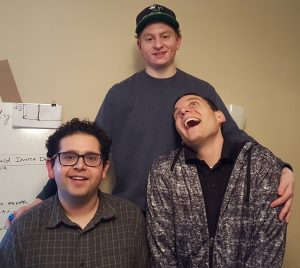 Patrick Scott is an expert on all things Pokemon and is the expert guest today on Schooling Noah w/Aaron Maslow and a Special Guest. Patrick explains how his love for the whited-up Japanese anime began when he was a boy and evolved into a lifelong passion. “Gotta Catch ’em All” is not just a catch phrase for Patrick; It’s a way of life. So much so, that it caused Patrick to do a bad thing when he was younger. Tune in to this episode to learn the history and culture of the Pokemon game and also Patrick‘s biggest shame!

Noah and Aaron learn a lot in this podcast. Today focuses on the progression of Pokemon as a card game and Game Boy game to the mega-franchise it is today, 20 years after it started and the awful thing that Patrick did. You will learn what is a Pokemon…animal? Sexy beast? TV Show? Something evil that Patrick did? He talks about beating gyms and Jims and violating the social contract. Poke breeding charts, unintentionally racist Pokemon and the Pokemon movie (and committing unspeakable acts). Plus, Patrick shares his billion dollar idea and, of course, his big secret!

Patrick Scott is a graphic designer who created the Schooling Noah logo. We are happy to have him! He is also a Denver-based comedian. You can find him at his website ImPatrickScott.com or follow him on Twitter: @ImPatrickScott