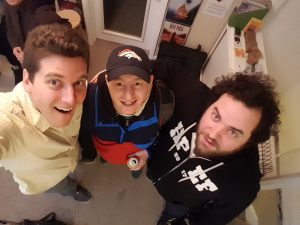 The Denver Comedy Champ, Nathan Lund, is here to talk about his passion, wrestling!

This here is the Schooling Noah podcast with Aaron Maslow and a Special Guest. Today’s guest is someone special indeed. Not only is he Denver’s Champion of Comedy but he is an expert in all things pro wrestlin’. We are talking about patriot and a true fan of the game, Nathan Lund. He spends his time with Noah and Aaron on all things wrestling including what it takes to make it to the big time.

Nathan gets into the statute of limitation on murder, MMA and wrestlin’, what Noah knows, Lucha Libre & Laughs, Andre the Giant, John Cena, Mick Foley, Kimbo Slice, the drama, the excitement, and who the best wrastler is. It’s all here. Plus, Denver’s Comedy Championship Belt. It has a home, but it’s looking to move. If you think you’ve got the guff, then Nathan‘ll fight ya for it.

Nathan is a touring headline comedian living in Denver. You can follow him on Twitter: @NathanLund or for a list of his shows, Facebook: Nathan, on Facebook. He’s a regular at Comedy Works in Denver and is host of one of the longest running open mics in town at 3 Kings Tavern…Fridays at 6pm.