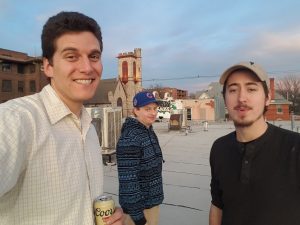 Roger teaches the inner workings of Baptist culture and why he decided to leave it.

On this episode of Schooling Noah w/Aaron Maslow and a Special Guest, Noah and Aaron speak with former Baptist member/leader/child and expert, Roger Stafford. Roger was born in a log cabin on the flat lands of Illinois to a father and his wife. They were and still are Baptist. On his road to maturity, Roger was met with the many teachings of the Bible and of Jesus Christ.

After over a decade of servitude, practice and salvation, Roger opted out (“If they’re not with us, they’re against us!” – Roger‘s Dad) and was excommunicated from his church. He is on the podcast today to tell all!

On this podcast, you will learn: the 2 kinds of Baptists. The amount of sex Noah has had and what happened to his phone. All things snake handling. Dirty Jesuits. The best chapter of the “Good Book”. The Lord’s Prayer. What’s a good sermon? Hear the voice of God. These are just some of the fun topics included on this episode. Thank you for listening. May God have mercy on us all.

Roger is not only an excommunicated Baptist, he’s also a comedian and a heathen. Check out one of his awesome showcases near the University of Denver: The Bear Creek Distillery and Comedy at Snarf‘s. Or his open mic at Scruffy Murphy‘s He will be on Comedy Works Funny Final Four in April and is hitting the road in March for a comedy tour…Illinois, Ohio, Iowa, Nebraska, Indiana. These are just some of the states in the country. Find more details at his website, Facebook.com/Roger